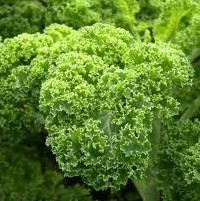 Cooler than Kale? Not likely!

I love Kale. It’s strange I know, but I am not the only one!  There is Bo from Eatmorekale.com who makes his own t-shirts with awesome sayings screen printed on them, (go buy a shirt then show it to me. I will be pumped!); there is the crazy farmer lady who owns the blog 365daysofkale.com, where she documents her year of eating kale every day, and of course there are the nutrition scientists who love kale because it is one of the healthiest things you can put down your gullet.

The amount of good stuff in kale and other relatives of the brassica family (think collard greens, broccoli, mustard greens and kohlrabi) is overwhelming. It could take up to 30 or so pages to fully explain the benefits of this vegetable, so here is a short summary of the goodness that is in kale:

Your natural multi-vitamin
Kale has a high content of calcium, vitamin C, vitamin B6, folic acid, vitamin A (in the form of beta-carotene), vitamin K, potassium, manganese, copper, and even the plant form of omega-3 fatty acids (alpha-linolenic acid or ALA). In addition to the carotenoid beta-carotene, kale contains other very important carotenoid molecules called lutein and zeaxanthin (both necessary for eye health) and numerous others (probably too many to count, and maybe even yet identified).

Eating kale is like winning the health lottery!
Kale has a substance called sulforaphane in it. Sulforaphane is a big deal when considering heart disease and healthy arteries. I recently came across some research that explained how sulforphane can “turn on” certain protective mechanisms in the arteries to protect against inflammation and atherosclerosis or hardening of the arteries. Kale and its brother broccoli have been tapped as containing the most sulforphane when compared to other vegetables and foods. So eat your kale. Your heart will thank you!

Need calcium? Kale has got you covered! One cup of cooked kale has more bio-available calcium then 2 glasses of milk! We need a T-shirt that says “got kale?”!!!

Kale: the James Bond of vegetables
What else does kale have in it? Yep. You guessed it – glucosinolates. Now, I am sure everyone knows the deal with glucosinolates….What? You mean you don’t??? Well, let me hit you with some knowledge!

Glucosinolates are compounds found in high concentrations in leafy green vegetables (especially kale). These molecules are especially cool because they activate the body’s own antioxidant system. This cascade of antioxidant activity actually cycles over and over within the body and continues to protect your system as many as 3 to 4 days after the glucosinolate-containing food has been consumed. Talk about protection! By this process, glucosinolates help the liver eliminate toxic molecules.

These toxins come from many sources: cigarette smoke, pollution, drugs, even free radicals generated by our own bodies in response to illness. So the big picture here is even if you eat super clean, it is good to have some kale in your diet to protect against the bad stuff that may be floating around in your environment.

Kale – it is like a vegetable Ninja!
O.K. you get the point, you should be eating some kale right now, but what if you really don’t want to gnaw on raw kale all day long? Never fear! I found some recipes from Diana at 365daysofkale.com that look delicious. Here are a few I found:

It is scrumptious with these ingredients just as written. In addition, this soup recipe is very adaptable, so many other ingredients could be added such as canned tomatoes, ground turkey or bison and other vegetables.

This recipe freezes well too, so make up a double batch to have some delicious and healthy food ready for your own home-made and inexpensive “fast food”.

As said by Diana: At this point the kale is ready to eat. I always like it most on the second day though. If I am making this as a dish to pass, I make it at least 6 hours before the start of the party to allow the ingredients to properly complement each other.

Bonus! Kale Chip Recipe!
Kale is fantastic and might save your life. Have I ever told you how good kale is for you?No?

Drink this every morning (like Ryan Seacrest who drinks green smoothies – and maybe you can host American Idol too!)

So there you have it. The jury has decided. The results are in. Kale wins. Now go buy yourself some! 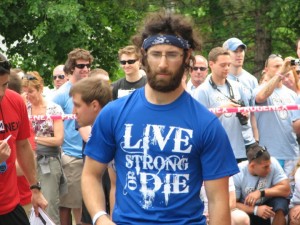 Yep, Eric looks like he sleeps on the ground, routinely hunts squirrels in an effort to reduce his weekly grocery bill, carries logs around town merely because its good exercise and no one will question him, and studies local beavers in an attempt to learn how to gnaw through wood with his teeth. It’s all true … but he knows of which he preaches: