Can you think of a time when you couldn’t find any food to buy or eat?  Believe it or not, a little over 100 years ago, there were a lot of people in the United States who didn’t have enough to eat.  Food was not widely available.  There weren’t multiple grocery stores in every town, and they certainly didn’t have 24 hour convenience stores. 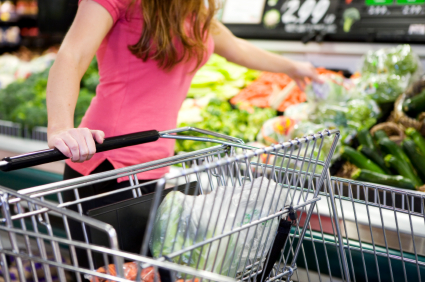 The USDA
In 1862, the United States Department of Agriculture (USDA) was created.  From its conception, it has served two roles:  the first is to ensure a sufficient food supply by monitoring and promoting agriculture in the United States; the second is to issue dietary advice.  These two directives complemented each other nicely at the time, because nutrient deficiencies and malnutrition were prevalent health concerns.  Leading causes of death at the turn of the century were infectious diseases such as pneumonia and tuberculosis.  Roughly the same number of people died every year from diarrheal diseases as from heart disease.  The USDA began educating the public to eat more, to prevent hunger and ensure that people were getting all the nutrients and calories that were needed for health.

Eat More Versus Eat Less
Today we live in a day and age where people need to eat LESS.  Food is much more widely available, and with greater variety.  Additionally, unhealthy junk foods are available that didn’t even exist 100 years ago.  Diseases that effect the majority of the population like heart disease, type II diabetes and obesity have causational roots in eating too much, especially too much of wrong foods.  The problem is that if the USDA were to encourage people to eat less, the food companies that they are supposed to be supporting would potentially sell less food.  The two roles of the USDA are in conflict with each other.  This creates a bias within the organization that has lead to questionable dietary guidelines.  Marion Nestle provides an in-depth look at this shift from “eat more” to “eat less” in her book, Food Politics: How the Food Industry Influences Nutrition and Health.  We, at Bonfire Health, strongly encourage you to read this book in order to better understand the food industry’s influence over current dietary guidelines.  We also recommend Academy award nominated film, Food Inc. which exposes the fact that oftentimes, the food policy leaders at the USDA are former food and agriculture executives, and therefore have ulterior motives behind their policies.

Cause For Concern
The amount of food that the USDA advises that we eat is not the only concern.  There are also problems with the kinds of food that we are encouraged to eat.  Studies show that sugar, certain kinds of saturated fats and simple carbohydrates like bread and pasta are unhealthy and promote chronic diseases like heart disease, obesity and type II diabetes.  Large food corporations have opposed USDA dietary guidelines that directly convey these dietary risks.  Highlighting risks associated with eating such foods would result in less income for the producers of these foods.  Many of the people at the USDA who are responsible for editing dietary guidelines have close ties with the food industry.  For instance, high level positions at the USDA have habitually been filled by former executives of the American Meat Institute and lobbyists for the National Cattlemen’s Association.  Many political players have also been employed by the grain and meat industries.  The film, Food Inc., highlights a few instances:

There is clearly a concern that people who have strong ties to the food industry would have trouble making unbiased decisions about our food as policy makers.

The Gap Between Research and Dietary Guidelines
The American Heart Association sponsored research on dietary fat and atherosclerosis in the 1950s and 1960s, and recommended that people reduce calories from fat in order to reduce the risk of getting heart disease.  This meant eating less factory farmed meat and less dairy.  Scientific reports from the National Academy of Science’s Board of Agriculture, the Surgeon General, and the Food and Nutrition Board all echoed that eating less fat, salt and cholesterol were necessary.  Following these similar research findings, beef, whole milk and egg sales declined.  The National Cattlemen’s and Beef Association and the American Dairy Association were outraged and they pressed for a revision of the dietary guidelines.  Changes included “avoid too much” being changed to “choose a diet low in” and changing “choose lean meat” to “have 2 or 3 servings of meat.”  The committee commented that “any food that supplies calories or nutrients should be recognized as useful in a nutritious diet.”  Not only do most Americans not eat particularly nutritious diets, but statements like these put all foods on the same level as useful.  As the federal organization responsible for educating the public about nutrition, helping people learn how to distinguish more healthy foods from less healthy foods should be a main focus.  Guidelines like these only confuse the public.  Bonfire Health makes it easier for you to be healthy by laying out clear-cut recommendations.  Click here to see our dietary guidelines.

The Food Pyramid
The Food Pyramid was created in order to educate the public about what kind and how much food should be eaten every day.  The first food pyramid was set to be released in 1991.  It was blocked by the USDA Secretary because he felt it was “confusing to children.”  This reason seemed so absurd that many people wondered if he was actually under pressure from the meat industry.  The Food Pyramid was certainly not thrown together, last minute.  The original Food Pyramid had been in development for 11 years.  During that time, consumer research was done on different age groups and different income levels to determine if the pyramid display was able to clearly communicate to different audiences.  It was successful in focus groups.  Marion Nestle further explains the development of the Food Pyramid:

“The 1990 Dietary Guidelines brochure incorporated the Pyramid serving numbers, thereby granting them status as official components of federal nutrition policy. In 1990 and 1991, HNIS sent drafts of the Pyramid booklet to 36 leading nutrition experts for review, presented at 20 professional conferences, and discussed the guide with more than 20 newspaper, magazine, radio and television reporters…they met with 30 publishers to arrange substitution of the Pyramid for older guides in forthcoming texts…Furthermore, HNIS had submitted the manuscript of the Pyramid brochure to the entire USDA bureaucracy through its exhaustive review and “clearance” procedures. A committee representing ten USDA units as well as DHHS had thoroughly vetted the Pyramid; the brochure had successfully passed six levels of USDA policy review and three divisional reviews.” – Marion Nestle, Food Politics.

Right before it was set to be printed and released to the public, a few news stories emerged that implied that the Pyramid suggested eating less meat.  That same weekend, the National Cattlemen’s Association had their annual meeting.  They were outraged.  They, along with the National Milk Producers’ Federation, demanded that the Pyramid be withdrawn.  The head of the American Meat Institute wrote a letter to the Secretary of the USDA.  And surprisingly, the Pyramid was withdrawn, citing a concern about school children’s ability to understand it.  Many news stories were released, insisting that the pressure from the food industries was the real reason.  And the researchers in charge of developing the food pyramid agreed.

The USDA did extensive research in the following year with school children.  They tested other graphics, such as pie charts, bowls and shopping carts.  Over $855,000 was spent on this research.  None of the other designs were found to be more effective than the Pyramid.  The press kept a close eye on the studies.  One year after it was blocked, the Pyramid was released.  However, some additional changes had been made.  The words “at least” were included before the meat and dairy servings, and the meat servings had been increased from 4-6 ounces to 5-7.  It became the most widely distributed nutrition advice ever published.

A New Food Guide
After all we have learned about factory farmed meat and fish, the value of eating organic foods, and the disease-ridden consequences of eating refined sugars, grains, and processed foods, we at Bonfire Health suggest some new nutrition advice.  This advice is not the result of lobbying and sponsorship from the food industry, and it’s not influenced by politics.  It is based simply on how to become as healthy as possible and avoid chronic illness.  Our guidelines have been used for thousands of years and are backed by scientific evidence.  And best of all, they are simple and easy to understand:

One thought on “Dietary Guidelines and the Food Pyramid”